In 2015, we have got the opportunity to work as service provider for construction of toilets in the villages of Md. Bazar Block under Nirmal Bangla Mission of Central Govt.’s Swachh Bharat Mission. So far we have constructed more than 1580 nos. toilet in 28 villages for the beneﬁt of rural people. For each toilet   Rs. 10,000/- is being provided by the Government and  900/- is paid by the beneﬁciary. We have the opportunity of convergence with Inner Wheel club of Santiniketan for funding of beneﬁciary’s share of Rs.900/- on behalf of the people who were unable to contribute their share.Now Govt. has taken the initiative with NGO’s for creating awareness against Open Defecation. They have been informed regarding evil habits of age old tradition of Open Defecation. A vigilant team of Govt. oﬃcers were created for triggering and they visited on several occasion during early morning to intercept persons who are violating the norms of ODF. Year 2017 declared Birbhum District is ODF District. 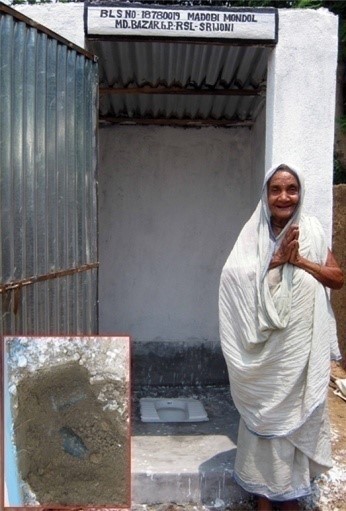